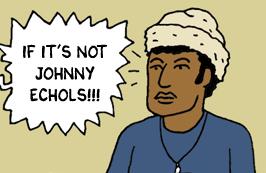 On a not so beautiful day in Oz, (it was raining) Kenny and I were on our way to the Vox factory, in the Valley. Forssi had received a phone call, from one of the rep’s at Thomas Organ (the US distributor, for Vox instruments) asking us to come over and tryout their latest project.

Love had an arrangement with Vox whereby we would use and endorse their product’s, in turn they would supply us, free of charge, anything in their catalog we desired; they would also give us first choice, of all their new gadgets.

That was (ostensibly) the reason, why g-forces, were pinning me against the back of my seat. Giving a credible imitation of an Indy car driver; Kenny would use any excuse, to “open-up” his Jaguar xke___even in the pouring rain.

When we arrived, we were met by an excited rep who ushered us into the sound room, where we were played a cassette (he) called the wah-wah tape.
On-it was a trumpet player named Clyde McCoy, making sounds that I can only describe as “weird,” it was a trumpet, attempting to sound like anything, accept what it was, (a trumpet).

What else have you got, “I inquired” ( I hadn’t played trumpet since high school!)
No-No,” he said, “this is meant for the guitar____”here, let me show you!”

The rep plugged a guitar, into a floor-pedal and began playing. “Oh I see” (I said sarcastically) it’s meant, too make a guitar sound like a trumpet! “What else have you got?” Kenny (ever the diplomat said) “listen to the thing, [Johnny] it might be really cool!”

We spent an hour or so, previewing their latest and greatest, before signing-out a couple of amp’s. I also grudgingly took the wah-wah pedal, as we thanked them and left.

In no-time at all____Kenny had the pedal too the metal and was back doing his impression of an Indy car driver!

Later that evening____Arthur and Bryan dropped by my house and heard me trying to; play the thing. It wasn’t pretty, it sounded like someone slaughtering baby sheep!
“What the hell is that, Arthur asked” I don’t know (I replied) “Vox gave me this thing, they want me to, try it out!” “Are you sure they didn’t say, throw it out,”
that’s my next move (I Told him!)

Bryan said: “hey you know what, if you put a pecan, right under here, It would make a great nut cracker!” Arthur, ever the quick one chimed in Bryan you are a
“Nut____Cracker!” Bryan rolled his eyes and said “very funny, Arthur” and asked if he could have it. “Go in peace my Son: and take this Abomination with you” was my reply!

About three months later, the guy from Vox called and wanted to know what I thought of the wah-wah pedal? It’s pretty cool (I said) not wanting a repeat of our last meeting. “The reason I’m calling (he said) is to ask if you would return the pedal, we only have a few preproduction samples and we need it back.” I told him that Bryan was using it, so I would have to speak with him about it! He asked if I would please try, I said that I would.

I phoned Bryan and made him aware of the situation and asked if he would bring back the pedal.

I’m sorry (he apologized) “I left it in Arthur’s car!” Next I phoned Arthur, in my quest,
too find the damn thing “I don’t have it” (was his response) “Jimi was over here fooling around with it____he dug it, so I gave it to him!

The next time I was to hear a wah-wah pedal, was on the radio____played the way, only Jimi could!
It was then, that I realized what I had given away! (One man’s junk, is another man’s gold) Ces’t la vie

Just another day in the life