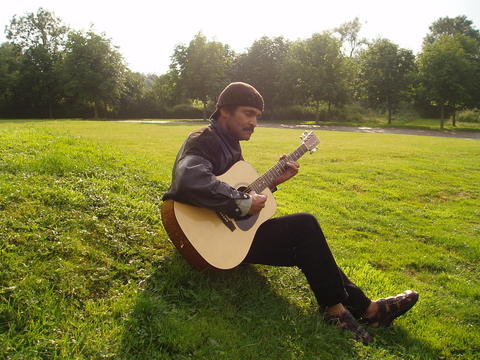 Johnny Echols relaxes before Milton Keynes show: One thing that could be said about this tour, there was a relaxed and wonderfully positive – dare i even say spirtual – vibe happening at all times. It was as if the Almighty had decided to plug every hole and see to it that we didn’t sink. This tour was OUR Apollo 13, but as this shot shows you, guys still found that down time to be together and experience this as one unit and bond together as friends, as family, as brothers. One of the neatest things was watching and listening to Johnny play guitar, particularly when he does flemenco style (like his licks on the original version of Alone Again Or.) Rusty, Johnny and myself discussed going back to some of the real original guitar stuff to reel back in that early vibe and flavor. We also discussed Rusty playing acoustic (plugged in) so we can re-establish that brilliant acoustic feel of that 2003 tour when we had the Ensemble. But this pix said loads about what life on the road can be like and what you can make of it. You may feel tired, you may miss your love or your family, but you have to keep a stiff upper lip and be ready to listen to what fans want to tell you and you need to be sincere in your ways. This tour was the firtst tour ever where we felt like Love fans were going to get performances of Love’s music without any disrespect to the quality and to the reverence to the music. Johnny’s a class act and a great guy to be around. He’s lived in Arizona for the last 30 years but now he’s back in the thick of things and I saw ‘Amen’ And I think that’s the message here: if you want to here Love’s music heard and played with the utmost of ability and emotion and what love has to offer as far as new music goes TODAY AND BEYOND, then the LOVE band is for you. if you prefer to hold on to yesterday’s news and prefer to resist obvious and inevitable changes, hey, help yourself. WE, however, are moving forward so, just remember…Forever Changes. 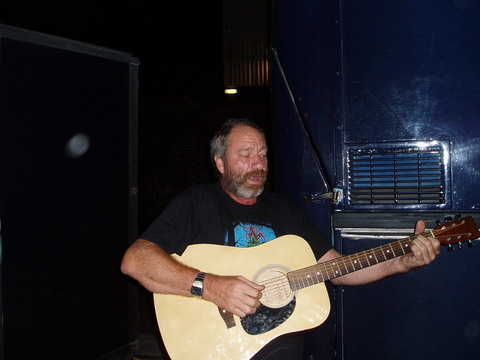 Dick relaxing and playing us some of his ilfrocombe classics: Our bus driver, Dick, a good man from the ‘West Country’ was about the coolest and bestest driver we ever had. he was so good at what he does and was just a mate beyond mates. We usually would have a problem on every tour with the drivers being agitated by some of our habits so this was really nice to not have that stress that was usually present fullstop. Dick had this acoustic guitar and the action was so high i think he could have driven the bus under it. We gave that guitar it’s own bunk too. and although Dick’s bus was the smallest we’ve had so far (by small i mean it didnt have 2 levels), we still had 2 lounges, television, DVD players, a kitchen, a fridge and a toilet. What more could you ask for? We also had a wine rack and hit Tescos up every other day. And each morning Fraser made everyone a cup of tea. And even though we got on well with all our old drivers, each time Glenn would try to book a tour none of them wre ever available to work with us again. Ever. We always thought that was odd…Dick, though, has said, ring him up and he shall drive us once again, which could be as early as Feb 2006, with another well known band…Dick’s wife, Caroline, let us do some laundry when we played ifrocombe and Dick hosted a BBQ before and after the show up there. he’s got a huge 3 story house that used to be a former hotel from the 1800’s. And it sits atop a hill so you can see the hillsides and the Bristol Channel. Due north would be Swansea, Wales, I was told. All in all, Dick’s the man, in our book. 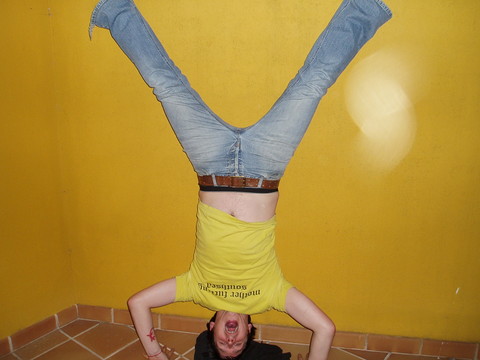 Fraser will go to extremes to sell merchandise, as this “i’ll stand on my head till my ears are turning red” marketing scheme fully exposes: Fraser’s the ‘baby’ of the bunch, which means he constantly gets picked on and even though i giggle i feel bad for the lad. he’s a sweet, sweet guy and a true mate. Still, i never got tired of Rusty and Johnny’s “Fraser, do this” and “Fraser, DON’T do that!” To Fraser’s credit, he told everyone, atleast 5 times a day, to f*ckoff. But aside from the silly stuff, Fraser is a total professional with great ideas and a great personality. i know, i know, whenever you see him his got his back to you, rizla and tobacco in hand, chatting up some goth bird. But y’see, that’s part of his charm! And actually Fraser’s in love (with a rather ungoth cute bird) so it’s been ages anyway since he chatted anyone up (and besides, it was always him just passing the time when things got bored) but maybe, if you’re lucky, Fraser just might chat YOU up during one of Daddyo’s drum solos or something for old times’ sake. And even though he resides in Portsmouth, don’t let the Scottish accent fool you; Fraser’s from Long Beach. 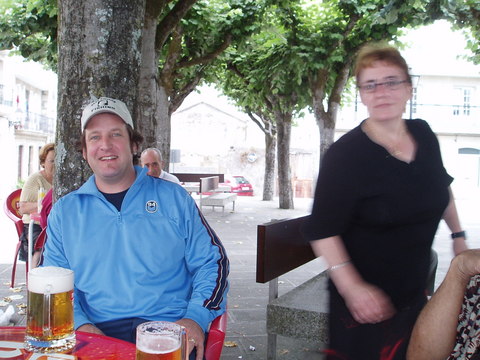 MILLER TIME for Daddyo!: The day after our Spain festival show, we had a day off before flying the next day back to London (and the day after that to Los Angeles for most of us) so we took that opportunity to find a nice taverna ran by a sweet older lady who kept flirting with me. She was old enough to be my Gran but that didn’t stop her. She also had the cervesas flowing and i mean 7 pints for 8 euros. That’s a fiver in Britian and a 10-spot in the States. but to me, that’s just a plain bargain. We all toasted when that first round came and good ‘ol Daddyo bought that first round. Daddyo plays a much bigger part than people realise. You could call him the assistant Manager of the band because he is indespensable to Glenn and to us all. Everyone in the group has a role and that’s what keeps this thing rolling but Daddyo is someone you know you can always count on and who will never let you down. I don’t know about you but that’s damn important to me. Our Manager, Glenn Povey, always appreciates how each of us chip in to make things that much better, whether it be Rusty learning lyrics and handling lead vocals at the last minute, or Johnny making himself available for interviews and photo sessions with no problems or ‘no-shows’, or Chapple doing ALL our merch designs and album artwork and web stuff, or me keeping the fans up to snuff on things or just being available to fans to express things to the group, Daddyo is that guy that is rock solid. As a matter of fact, he emailed me this morning at 5am to say that some band business he was to deal with today, he will do so, but only after he returns this afternoon from fishing! And avid fisherman, BBQ’er and kyaker, Daddyo lives in the (north of downtown) Eagle Rock hills with his wonderful and gorgeous wife, Traci, and their hyperactive but lovely dog, Urma.