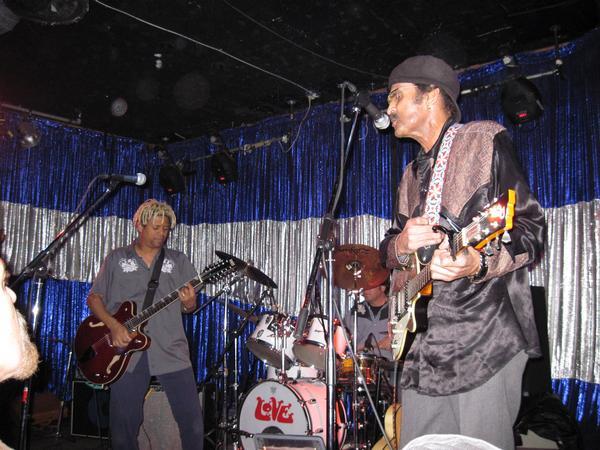 I woke up the morning after my birthday about 8:30am and had waffles and veggie sausage like i did on any other morning. At the back of my mind was the Spaceland show we were doing as Johnny Echols’ Turn later that night and I would try to envision what I might expect. But of course, there’s no way to predict the future, especially when it comes to the music business. So after breakfast I got Hannah’s lunch together and got her to work. I then came back home and practiced some guitar until about 9:30am, then showered and headed off to the guitar shop around half 10, which is about 5 minutes from my home. In typical Mike Randle fashion, I usually play Journey’s “Don’t Stop Believin'” on my way to work but on this occasion I opted for Steely Dan’s “Night by Night”.

I left the guitar shop at 5:30pm for a 6:30 soundcheck at Spaceland. Or at least that’s what I THOUGHT. By 6:15 i’d only passed the 405 Freeway (which is only 3 miles from where I started, with only 20 miles to go!) and i thought, damn, i’m NEVER gonna make this soundcheck! Then the Freeway Traffic Info Board said “Downtown 55 Minutes”, which was WAY uncool because Spaceland is at least 20 minutes from downtown in a traffic jam. I took a drastic measure and exited on Robertson and Venice, which is Culver City, no matter how you slice it.

I then took Venice Blvd. East to Hoover Blvd., made a left and then took the immediate right on Alverado. I took Alverado PAST the 101 and meant to turn left on Sunset except there ARE NO LEFT TURNS ON SUNSET BEFORE 7PM and it was 6:55pm so i went 1 block past Sunset and made a right, which nearly took me to Club ECHO and the ECHOPLEX but i kept right and made a right on Sunset and then i was on track. I then took Sunset to Silverlake Blvd., nearly hit two bikers (both of which whom had it coming, trust me), make a right and landed at Spaceland about 7:15pm. After several texts messages from (Quarter After’s) Rob and Dave Chapple, I was finally there. We sound checked (which sounded fab) and then the Daves took off for home, as they both live only a short spell from Silverlake.

I took a walk to 7-11 for the Cash Point and then headed to the Thai place next to the club but not before chatting with some really great folks who had lined up outside to see the show. So i walked into the place and it turned out they did not serve beer or anything so i said to myself, oh well, you know….it’s gonna be a long night. Then I was saved by Love fans, Margeaux and Marty (both from Long Beach) who invited me to their table. I ordered a thai salad and they poored me a few glasses of the beer they brought. Margeaux turned out to be a LB DJ and Marty was her dad. They were such awesome folks, so nice to me, and made me feel so much more at home. They certainly made my show experience much better just by ‘taking me in’ like that. So i wanna say thanks to them. I really mean that.

Got back to the club around 9:30pm and hing out with some cool fans. Everyone was so nice. Found Johnny and JJ later on and we all laughed and had a drink. Vince was hanging out and we talked about him doing harp on a tune, which was cool. I then went over to hang by the east door (near the sound guy) and was chatting with Dave from Main Street Santa Monica, who was holding his Forever Changes LP with Johnny Echols’ autograph on it. Dave and i had met last year when I use to live just off Main Street. He saw me on the street and asked, “Are you the guy who played with Love with Arthur Lee?” And I was like, how would you know! He’s barely 21 and looks 16. But he knew EVERYTHING about Love and was just this massive fan of that musical era, which is solid proof that it’s a timeless period with timeless people and timeless music, methinks.

As Main Street Dave and I were talking he asked if i knew what Michael Stuart-Ware was up to and i told him how i could not be sure he’d ever get the autograph of the only other living Love member from FC. No sooner i said that than (Longtime Byrds and Love pal) Dennis Kelley walked by me in the distance. I almost didn’t recognize him because he was sporting long hair and he had a goatee. Plus he lives in Vegas and I would think he would have called me to tell me he was coming to the show. Still, I called his name out but he didn’t hear me. I ran over just to make sure I wasn’t crazy and, yep, it was Dennis. But he wasn’t alone.

Turns out Dennis had come to the show with Michael Stuart-Ware! I went up and chatting with Michael, we hugged and caught up a bit. I immediately told Johnny and Johnny and Michael were soon catching up as well. We invited Michael to come up and play tambourine on MY LITTLE RED BOOK, which he agreed to, which we were very excited about. Daddy-O and Chapple came over and then Love fans figured out MSW was there and soon him and Johnny were signing, talking and laughing with lots of folks. It was truly a “Love In”!

The solo opening act was really good. And then The Quarter After came on a played a fabulous, blistering set of original music reminiscent of the Kinks/Byds/Beatles. My wife Hannah arrived just after that, getting a life from my buddy, Wicke. A little after 11pm we took the stage and began with MY LITTLE RED BOOK after introducing MSW with an invite/demand to come up and play tambourine. He did a fantastic job and we played our hearts out on the song. As Michael was leaving Johnny said,”hey man, since you’re here…” and we then ripped into a BLISTERING version of CAN’T EXPLAIN with MSW on drums and Daddy-O on tambourine. Dave Chapple was tearing through the bass and we were all bouncing around having the time of our lives.

I’d taken to using my Eastwood Classic12-string Electric Guitar in rehearsals because it sounded so good and authentic and thus decided to take it to the stage. We went into a fun, swinging version of SMOKESTACK LIGHTNING before going into STEPHANIE KNOWS WHO (my guitar strap on my other guitar fell apart, the buckle flying into the audience. Lucky for me, Peer Music’s Kara Wright was right up front to catch it and return it to me!). Most of the cuts had Johnny and myself either in Unison or harmonizing, with Dave Chapple backing us with harmonies as well and Daddyo just had the cues and the beat nailed. We went into SIGN DC with Chapple playing Bass and Harmonica at the same time (Don’t try this at home, kids!). We went into a Gethsemane song, AMERICA, that Johnny played some amazing guitar leads and sang his butt off. That song could be about 1969 or 2009, that’s how relevant it is. After that we played one of my all-time favorite songs, NO MATTER WHAT YOU DO, which sounded really good to my ears and the people AND the band enjoyed it a lot.

I think we did REVELATION and ALONE AGAIN OR after that, both tunes featuring 2003-2005 Love with Arthur Lee trumpeter/flutist, Dan Clukas. If you were at that House Of Blues show with the strings and horns then you saw Klookie on She Comes In Colors. After that I believe we did YOUR MIND AND WE (which i think we tried to take to UNREAL levels) and we ended it with SEVEN & SEVEN IS.

The show over and the night winding down, I thanked everyone i could find and said goodbye to everyone. It was such a special night, one of the best times ever for me. Of course I missed Rusty on stage and we did things very differently but what we did worked really well for this. And we always miss Arthur – that goes without saying. And I left Spaceland once again feeling like the luckiest guy going. Gave a big hug to Dean Dean the Taping Machine (ah….you bootleggers…) and then Hannah and I hopped on the 101 North to the 405 South to the 10 West to the Lincoln Exit. Yes, we tried to go to Tommy’s Burgers (Cheesy Chips for her, Double Cheese for me) but, at 3am, it was closed. We drove home and hit the hay, big time. 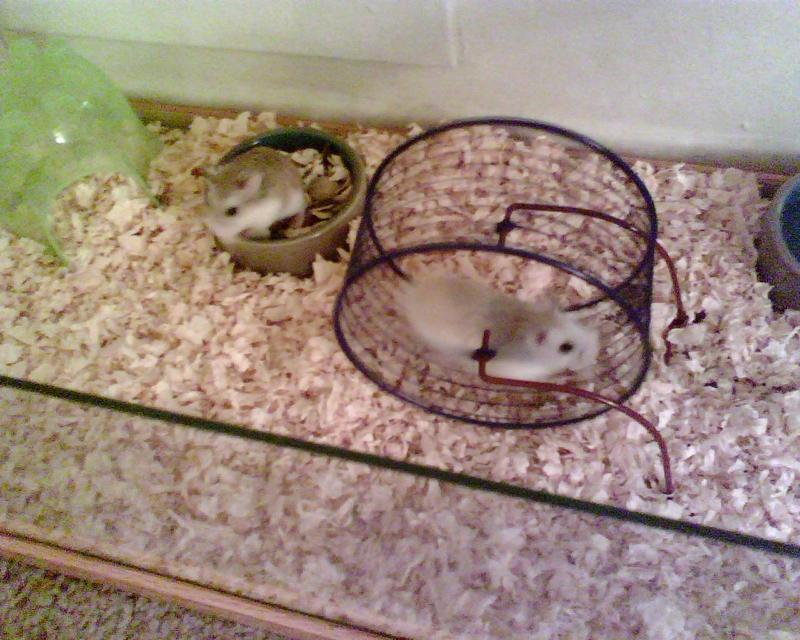 The next afternoon we took a drive downtown to Olvera Street and Chinatown and spent a good few hours there. Then we came home and Hannah went into PETS OF WILSHIRE and found two of the cutest Dwarf Hamsters ever. We talked about it and decided to get 2 of them. So Hannah went back Saturday and got the two little buggers. Officially they are called Robo Hamsters (Phodopus roborovskii) and we have named them Bogart and Roland (“Bo” and “Ro” for short). Hannah loves them. I love them. We bought them 2 separate exercise wheels because Bo kept knocking Ro off the first wheel. Now it’s all good. Everybody’s happy and that’s how it’s supposed to be.