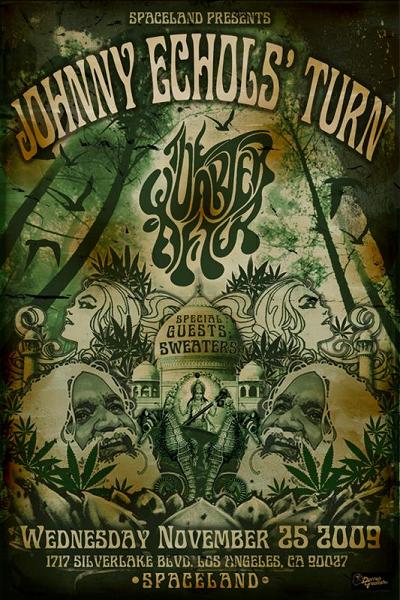 Last night I left Dave Chapple’s studio around 9:45pm on a night when all the stars were out and dancing amongst themselves. I opened up the top and joined the rest of Los Angeles traffic on the 110 going south, Dodger Stadium to my right, downtown skyline to my left while blasting Michael Jackson’s “This is it” CD. And there’s always that feeling on LA freeways where you feel the next mile could be your last so i took it all in and just basked in such a serene evening.

The rehearsal i’d just left earlier was just fantastic. I was concerned how things would go over playing these songs and doing them – first without Arthur and now without Rusty. Well, Johnny Echols just blew us all away. Here’s a guy that’s eager to show you what you missed if you weren’t there in 1966. If it was anything close to what i saw last night then I guess Jack Holzman was right when he told me and Mike “Ringo” Harrison that, back then, Love was the best band in the world when they were on, better than the Stones or the Doors. I believe it.

Last night, at times, felt like a swirl of Byrds-like blues, with an interesting Jazz element. Very musical, everyone singing, everyone swinging. And our boy Dan Clukas was playing the trumpet as a man possessed. No one knows these tunes better than Daddyo Green…we’ve been playing them for nearly 20 years, but we added others that we’d never done before, not to mention newer ones Johnny has showed us. It’s all blending together so well and it felt so natural to play…no TRYING or PUSHING to make things work. it all fit real nice-like.

So that’s what i was thinking about while listening to MJ, a guy who wasn’t afraid to try something so big some would correctly predict it wouldn’t happen. Still, it didn’t stop him from trying. If you are lucky enough to see the film THIS IS IT, you will see true dedication to perfecting what it is you believe in IN ACTION. No matter what it is you do, no matter who you are or where you are, if you focus on giving your best effort everytime, you will be a winner everytime. And if everyone in your circle focuses on giving their best together, you’ll have a winning team.