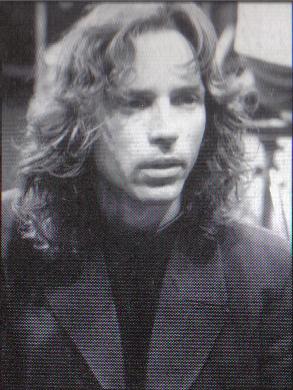 Road Manager for The Doors,

We had three days before we were to go to New York , so . I went home to visit. It was then that I had my business cards printed. We stayed at the family house in Andover. Terry was the son of a gentleman and h . He met with my father’s approval , which . That was no easy job, I assure you. My Mum fussed over us . She and baked home made bread for us, and that alone was worth a trip across country ! Of course we spent time with the Organ Factory. They wanted to know all about what was going on with The Doors , and the news of future plans. Terry was quite impressed with the skill and accuracy with which they played pieces from other bands.

Our next performance was to be at Bill Graham’s Fillmore East . This which was a magnificent place in an older theatre , a magnificent place. It was built during the 1920 s period when m Movies were the major entertainment of the day. It had beautiful tapestries, gilded molding, and a stage that could be used for live theatre as well as movies.

Bill had the same efficiency in New York as he did in San Francisco. Two platforms were on stage and made change over very fast and efficient. Most important for to Bill , it was that the set up kept the crowd from getting restless and troublesome. Of course he had imported the California Light Shows and the eastern crowds really liked that. They had modified the real projection booth to give large, wide openings , and had set up tiers of projectors to get the images onto the wide screens hanging just in front of the proscenium arch.

One interesting thing about this theatre was that , when Bill had bought it, all the stage facilities were intact and pretty much operational. Bill had got everything working so the bands had the advantage of three rows of overhead borders and d torm lighting from the sides. This was the beginning of a trend. On this one it started in New York and traveled West , as the New York stage people sought employment with the growing number of West Coast Rock bands. About a year later, Chip Monk was to become the most famous, sought after after. and highest paid “Lighting Director” in the business. He was good , and he was willing to teach. I was willing to learn.

We played 3 three nights in New York . It and it was absolutely sensational. It was probably the greatest performances of their history. I wish that I could tell you about these shows , but the Doors ’ performances are were about sound , and movement. How can this be accurately described in just mere words. words? It was about the way that Jim sang and how he moved around stage. Of course the peak was when he flopped around on the floor. The crowds liked that. But that was visually sensational. I suppose the sound was as well , since he was making some very suggestive and primal vocalizations as he writhed on the stage.

But it was the music , too as well. There was a beat that could not be mistaken for anything else . Between the delicate music from John’s drums , and the low thumping beat of the Piano piano Bass bass, the impact in the most basic emotions was not to be ignored.

Ray had shoulder length, straight blond hair. He would play hunched over the keyboards, hid his right hand on the organ and the left on the piano bass which sat on top of the organ at the far left end. As he played he would keep time by bobbing or turning his head and that long hair would sway with the motion. Ray was always the Dapper Gentleman. He was quite tall, with a heavy frame and somewhat well muscled. He wore tailored suits made to fit his tall frame. When he walked on stage he cut quite a figure. He had an air of dignity which dignity, which contrasted with the flashy and colorful clothes that both John and Robbie would wear.

Robbie was another case. In locations like this old theatre, where Robbie could be lit from behind, his hair was illuminated in such a manner as to present almost a halo. Often it was referred to as “Electric Hair”. Robbie would wander around the right side of the stage (Stage L left) playing the most incredible music and be staring off into space. It was almost as if Robbie he was playing the guitar without being conscious of what was going on.

He had this strange look in his eyes as well. People close to the stage would often talk about how Robbie was “ Spaced Out’
a condition which was the result of using “ Acid ” or eating psychedelic mushrooms. The truth was that Robbie was quite near-sighted and needed glasses. Instead, he wore contact lenses which lenses, which, in those days were new and made of little discs of fairly hard plastic. They worked very well, but they were uncomfortable and could be worn for only 3 three or four 4 hours at a time. Of course the “ Smoke ” that was a constant feature of rock performances, irritated his eyes. The end result was that he looked as though Robbie’s his body was on stage , but Robbie he was somewhere else in places unknown to all but Robbie.

John was incredible. In some of the hard driving passages, he would strike the drums with such force , that his whole body would give a little upward movement. He was almost obscured behind the small toms, mounted on the Bass bass Drum drum and the cymbal stands . That but that didn’t matter. John did not have to be seen to know that he was there. His beat was rock steady, steady; his instrumentation was rehearsed to perfection.

For many groups, the drums were a means of providing a beat that the other players could follow. The music was ornamented with cymbal crashes, bass drum thumps and rifts across the various toms. Otherwise it was an d exercise with the snare drum and monotonous tap of the Hi hi- Hat hat.

With John, the outlook was much different. The Drums drums were as much an instrument in that band as the organ or the Guitar guitar. Other drummers used many cymbals and double basses all set up on a forest of stands like mushrooms growing in the woods. Even in some cases , there when there were two drummers , I will can assure you that none of them had the talent and the absolutely incredible expression that John did. I said it then, I say it now , John was probably one of the best drummers in the music industry. The shame of it all is that, like Robbie, he received little recognition and , overshadowed by more flashy people with far less talent.

As much as I would like to provide in words , what one would experience at the performance , – it is an impossible task. You had to be there. I guarantee that even after the show, you could not tell your friends what had happened to you. You could use all sorts of descriptive words, most of them meaningless, but a Doors performance was a physical, audible and visual experience – indescribable. It was a shame that these shows were not professionally recorded.

Whereas though I cannot tell you of the excitement of the shows , I can tell you of the events which that followed , which . And they were pretty strange.Part of the shows was the crowds and they were ecstatic. That went a long way toward the excitement and enthusiasm of the Doors. The shows just seemed to go on and on without wanting to end. As a result, when they did end, , it was late and the boys were tired.

On the last night of the show at Fillmore East, there was to be a party. It wasn’t planned, it just happened.

The crowd left the theatre and the place became quiet. The Boys boys had retired to the dressing room after the last set. Bill, the perfect host as always, had some food brought in and everyone tucked in to enjoy it. Terry and I got to work to put all the amps and instruments away as we had to head back to Los Angeles the next day. The boys, Bill Siddons and Bill Graham, with one or two others , came down to the stage to just relax a bit before going back to the Waldorf Astoria where we were staying.

Somewhere along the line everyone was agreeing that the shows had all been exceptional. Bill sent one of his boys out to buy some Champaign. The party began at about 01:00. We all sat around sipping Champaign, and I my Pepsi, talking about music, musicians and all that went with it. It went on for hours and it was about 04:00 when the party finally broke up and everyone decided to sleep. Boy, did we need it !

The equipment was stacked on a neat pile on the stage . . We were to come back there at 09:00 to get the equipment into the truck, which was in a parking lot not far from the theatre, and get to the Airport airport for the flight home. Bill had two guys there to watch the place and to make sure everything was safe and secure. Everyone jumped into taxies and we headed back to the hotel to get some sleep before the next ordeal. Even then, tired as we were, sleep came slowly. The adrenaline was still flowing.