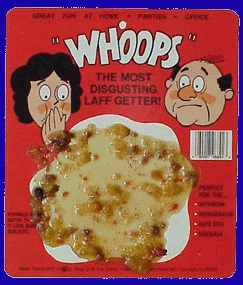 I’ve been to a lot of places and tried a lot of restaurants and I’m actually not that picky. But when it gets back, I usually take notice and almost always take notes. Below are my all-time worst eating experiences. Say a prayer…

#9-The “Truck Stop” in Lawrence, Kansas. Everyone who works here is inbred, trust me. The breakfast special is the “cheese emolotte.” Of course, this consists of a thawed-out PREMADE emolotte with a Velveeta slice on top and MICROWAVED. Don’t laugh; this is considered gourmet in Kansas.

#8-Premeire Lodge Restauraunts. Where? PICK ONE! Anyone! Guaranteed to make you barf, the P.L. goes out of it’s way to poison you while stealing your money at the same time. Besides their large collection of MOLD that resides just on the other side of each-and-every wall, the P.L. restaurants have a large menu that gives you the impression the food is decent. Trust me, their food SUCKS.

#7-BOB EVANS..any Bob Evanss…but especially any in Mousiouri or Ohio. I mean, if you have no teeth this stuff is probably decent…but if you want your food COOKED all the way thru, you might wanna stop by Burger King just in case.

#6-That one Hamburger Stand in Rotterdam across the street from the Organbaum Factory. Wow, this was THE WORST HAMBURGER ON GOD’S GREEN EARTH!!!!! Me, Rusty, Jazmaan, Daddyo, Ringo, Rocky and Chapple all orderd Burgers. The SINGER knew better and got a salad. This was in may 1996. I don’t think I could do those burgers justice…maybe someone could compel Jazmaan to give some adjectives concerning said Rotterdam Burgers…I mean, all I can come up with is “Dog Food on a Bun.”

#5-Delorres’ in West Los Angeles. I swear, at least once a year, my friends, Jonathon and Dennis (of the rock group, JIGSAW SEEN), WANNA GO EAT THERE AFTER A SHOW OR SOMETHING…I ALWAYS politely decline. This place is 24 hours, a very popluar late night spot and the food taste like shit…plus, everyone that works there is 107 years old and they forget half the order before they even get to the kitchen so, what’s the use? And the food is just frozen crap that they heat up. This place has been around for like 50 years. How the rioters missed it in ’92 I’ll never know…

#4-Jimmy’s Cafe, in Oklahoma city, OK. The best part of this place was the guy mopping while you ate who had a ciggy in his mouth and his radio on. The menu looked dangerous so i tried a full-proof plan…go for teh soup…WRONG PLAN! The soup was so salty and discusting, I thought maby someone in the kitchen knocked over the whole salt shaker into the soup pan. This place was “down home ” trailer.

#3-ANYWHERE IN INDIANA. Doesn’t matter. Any restaurant, any place and anytime…they are trying to poison anyone not already used to a lifetime of their “hometown” arsenic.

#2-The second worst restaurant I ever ate at on the road was somewhere in Pennsylvania, near Penn State University. Can’t remember the name but boy do I remember the food. And how. Funny how these places will serve you food without ever thinking about how you may have children or a family that cares for you. This was one of those “down home” places where the Waitresses are terse and you can practically read the years in their eyes. How they pretend their small town is the greatest and that they’d never leave KNOWING GOOD AND WELL ‘ol Bubba (remember Bubba?) would chop her up into a zillion pieces before he’d let her leave. So they serve this slop all day long and I spose peope get use to it. I know it made me sick and I’m being nice about it. The waitress took the trash out and then made a customer a salad without washing her hands…(i know everyone in Liverpool is saying, “So?”)…couldn’t get out of there fast enough…

#1-And finally, the worst food I EVER consumed while traveling was a breakfast I ate on a BRITISH AIRLINES flight from Copenhagen to London. To say the food was aweful would be to say Mozart had talent. This…STUFF they served us was terribly diabalical!!!! I think Rusty hit the nail right on the head when he remarked that the Eggs could double as a floatation device, in the event of an ocean landing. Although I’ve never been to the Los Angeles County jail, I’ve heard stories about their eggs (the powdered kind) being aweful. Well, let’s just say that British Airlines’ make L.A. County look like SPAGO’S. They serve better food at Public Exocutions.