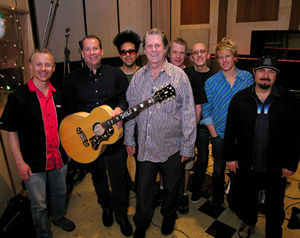 Probyn (aka, Probalicious, Probatussin, Giant Probot, Probalactic) just told me he’s doing some Brian Wilson shows out of the country next week…good on him. He also saw Mike Love’s Beach Boys (which he said was quite good, despite some, er, digitally ‘enhanced’ harmonies! Well, at least the fans get to hear some music. SOME good music is better than no music at all, at least from my (as a BB fan) perspective. I have seen the “Brian-less” BBoys but it had Carl and Al in it and it was mostly car songs (Attempts at Smile! and Pet Sounds were unheard of, outside of Bootlegs and Paul Rock’s Hollywood Hootenannies featuring Baby Lem. and The Wondermints, which was around ’92…) but it was enjoyable none the same. Now Brian has the best band going these days and it’s worth every quid.

In my spare time I’ve been recording demos for friends (for free!) and it’s been nice doing that. One of my mates, Jeff, is an aspiring songwriter ala Jimmy Buffet. He has a slew of tunes in that genre and so I am helping him get his demo together, which, hopefully will allow him achieve what he wants. I recorded all the music ahead of time (from a guitar/vocal performance he did in my living room) and i programed some drums, played some piano, bass and guitar, a little organ and some slide guitar. All he needs to do is cut his vocals. If we like the way it sounds we’ll see if we can get Daddyo (if he has time) or someone to play drums so i can erase the drum machine.

LA has been hot lately and dang it all, soooo HUMID, which is either an anomoly or global warming. Well, all i know is it sucks being a polar bear these days…