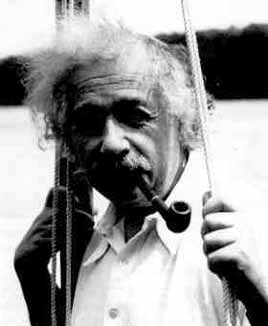 A lot of people really like quoting famous dead scientist to get their point across. Take for instance, Einstein’s famous line about Quantum Mechanics, that “God doesn’t throw dice,” which was his way of rubuking Q.M. as something too complicated and conviluted, preferrring instead that something more “beautiful” and “simple” was what God had in mind. Isaac Newton (or, “Sir I”, as the aristocracy hommies used to call him) once stated that “If I’ve seen farther than others, it is because I have stood on the shoulders of giants.”

I notice this all the time, but none so much as when I am watching fox news or msnbc or cnn and they feature these “self proclaimed” war experts as guests, giving their “expert” advice about just about anything you can think of that’s war related. But after surfing the net and sifting through various sites with information, i found out that Einstein really wasn’t known as a very religeous person (He was also a terrible father.) But people love that quote and try to point to it as an example of a scientist inserting God (heaven forbid?) into their ideas. The “Genius” would take his feelings about Quantum Mechanics to his grave, never quite believing his contemporary, Neils Bohr, had it right. But he was wrong about Q.M., as your cell phone, computer and PDA will attest to (I guess God does throw dice.) Flash to 2003 and, this total nut, General A**hole from the Vietnam war, used the Newton quote to sort of pat himself on the back, and, having been involved in exactly TWO wars in 40 years, I couldn’t really understand what made him an expert (although it was plain to me what made him an A**hole; this was the type of madman that had no problem even sending his OWN children off to be butchered in Vietnam…) What the General DIDN’T acknowledge (and i know this to be true, as I recieved Newton’s biography as a b/day present 4 years ago and read all 1300 pages TWICE), was that “Sir I” meant it in a derogatory way and actually said it with a smirk.