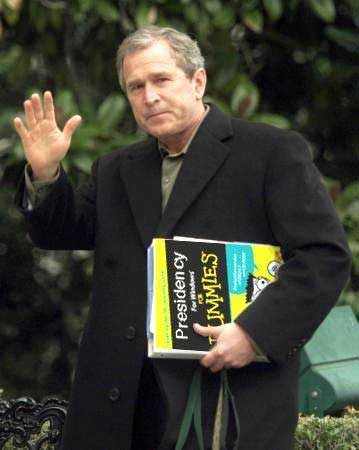 Now, although I had heard that the USA was going to start excepting bids from engineering companies for the “rebuildment” of Iraq, I thought that…ok, this is TOO obvious, ya know? Ok, you wanna kill the guy who yer daddy wants dead, you want his oil cause yer a texas oil man and now yer trying to hand out contracts to yer buddies to rebuild the place you haven’t even blown up yet? C’MON! BLOW IT UP FIRST, guy! According to Reuters, the winning company would get about $900 million to repair Iraqi health services, ports and airports, and schools and other educational institutions. Come again?

When i was a kid, i have to admit, i LOVED to destroy things and put them back together. But that was toys. $900M in repairs must mean a significant loss of life..UNLESS EVERYBODY leaves town for the bombing, which i doubt. I mean, I am friggin’ perplexed at this point. Our national security is threatened so, do we close all our borders? (which is what any country in that situation does) NO! The security of the free world is being threatened by North Korea…I mean, they are FRIGGIN’ EATING CHOW MIEN WHILE SITTING ON THEIR WAR HEADS! Do we approach them (and the U.N.) with TRUE diplomacy (does the USA even know what that means these days?) so that the whole world can at least fell, not only at ease, but that the USA is still an intelligent and worthy super power? NOPE! Do we try to “liberate” the many populations that have regimes that are run by dictators and invade the countries that are friendly to Al-Quada (like Saudi Arabia?, who’s prince ATE BBQ in texas last month with ‘ol dubya)? NOPE. instead, we are going after…you guessed…SADDAM HUSSAIN!

Now, I though LONG and hard about the idea of blowing 900 million dollars worth of a city up, simply to have your pals come right in a fix it up. I called a construction company in Hollywood, WESTSIDE CONTRACTORS and ran that premise by the head guy, Don: “Say, Don, how much would it cost for you to rebuild my house on a certain property.” the guy asked me how many rooms and what neighborhood and how many stories. “3 bedrooms, 1 story somewhere in Hollywood.” he said,”We could do it for about $400,000. When would you want to start?”, he inquired. “Well,” I told him, “I need to destroy the old house first.” He asked me what was wrong with the old house and I told him I needed to “liberate” the occupants, which would require me to blow up the house. He found that odd.

“Why on earth would you blow it up if you are trying to save the occupants? You’ll kill them in the process!”

“I know, Don, but that’s a chance I just have to take. The end justifies the means. I gotta blow the place up and i need to do it by 5 O’clock.”

“That’s in 15 minutes. You want us to come down next week and assess the property for you? I mean, maybe you don’t have to blow it up. That’s not your only choice, you know.”

“Look Don, with all due respect, if i hire you to rebuild a house, just rebuild it, ok? let me worry about destroying it.”

“Well, it seems really dumb, that’s all, like a real waste of money. Maybe you oughta get another company to work with.”

“You backing out on me Don, like those French did us at the U.N.?”

With that, Don laughed, told me good luck, and hung up. I didn’t have the heart to tell him that The Wall Street Journal said invitations went to Parsons Corp., Louis Berger Group Inc. and Kellogg Brown & Root, a subsidiary of the Halliburton Co. once headed by Vice President Dick Cheney. Now THAT’S what I call spreading the LOVE around town. Also, according to AP, Halliburton’s Kellogg Brown & Root has already won a government contract to oversee firefighting operations at Iraqi oil fields after any U.S.-led invasion, a Defense Department source told Reuters last week. Cheney was Halliburton’s chief executive officer from 1995 to 2000. NOW I think it’s all clearing up…But what I want to know is, for $900 Million dollars, let’s just hope we’re getting a discount.