Tuesday, March 9th was a glorious sunny day as we set off from Lugano, Switzerland to make our way to the Italian gig. The driver, my Swiss friend Nicola was…well…driving and another the other passenger, Chris, who was, due to other commitments, going to take the car back to Switzerland that evening and was having a hard time accepting a recent “barmaid breakup”. You see, there are all sorts of relationships in life and when a beautiful barmaid from a bar you frequent suddenly says the dreaded words “I’m leaving this job”, well, it can be hard. So, we coined the phrase “barmaid breakup” on the journey and discussed the possibilities of forming support groups for victims of such breakups. Anyway, we slotted in the Royal Festival Hall CD into the little hole on the dashboard and, yeah, things seemed alright…

We were about 1 mile from the border when I realized I did not have my passport with me. Naturally, I shouted out a few profanities and was apologizing to the others in advance for the inevitable “turn back to get passport journey”. We had a great plan though – we were hoping that we’d get waved through by the border guard without them stopping us. At the border the guard motioned for us to roll the window down. Crap. Our master plan was foiled.

“Tutti Svizzeri?” (Is everyone Swiss?) asked the guard.

“Sono Irlandese” (I am Irish), I said. And Nicola explained that we were going to see a concert in Bergamo.

Now, nine times out of ten, when the border guards asked for nationality and you are not Italian or Swiss, they would ask to see your passports. Not this time! He told us to enjoy the concert and waved us on. Of course 50 yards later we meet the Italian border guards, but they were obviously busy talking about their latest shoes, haircuts or football conquests, and so, just waved us on through without stopping the car.

Bingo – I was in Italy, albeit with no passport, but I was thirsty and told Nicola to step on it. We arrived in Bergamo about 6pm and called at the train station to pick up my mate Ciaran, who had earlier arrived from Dublin. We then made our way to the hotel and Chris took the car back to Switzerland. Nicola, Ciaran and I checked in. The band was also staying at the same hotel and Rusty and Daddy O were in the lobby about to go to sound check. I had a quick chat and headed to my room.

Five minutes later Nicola, Ciaran and I we were enjoying a cold beer by the hotel bar, and thirty minutes later we were enjoying a meal and bottle of wine. Then we made our way, thanks to a hotel employee, to the venue. “Motion Unlimited” was the setting, in a town called Zingonia, a few miles outside Bergamo. We were outside the venue, and I was looking for two gorgeous Italian girls in the line to join us with our complimentary passes thanks to Mike. There were no gorgeous Italian girls in the line…in fact, there were no girls in the line.

Inside I met Mike and introduced him to the boys and the empty space where two gorgeous Italian girls should have been standing. So, I bought Mike a beer – and the Italians like to complicate things, bless them, so, thirsty patrons had to buy a ticket to get a beer. I bought a handful. So, the barmaid filled a few beers and I asked her for large ones. “These are the large ones”. They were in little glasses, maybe not even half a pint volume. So I wondered if I had ordered a small beer, would it have arrived in a shot-glass?

Anyway, we went back stage and met everyone and I recalled my “India Story” for Rusty, Daddy O and Mike. This is the same story I told Mike at a bar in LA when Quentin Tarantino also listened in. (See Diary, March 16 2003 http://thefreedomman.com/love/diary218.html). Mike wants me to write the story for his Diaries some time, so watch this space, but, it may just end up as a scene in a Tarantino movie someday and that’s even better since it’ll save me two pages of typing.

Anyway, Arthur arrived backstage, I said hello as I headed back to the bar upstairs. There were less than 200 people there even though the venue could have held maybe 1200. Italian ‘promoters’! The boys arrived on stage and blazed through a set, everyone giving it all to the performance. Arthur was in fine form and I was standing to the left of the stage, singing along to all the songs and passed Mike a beer between the Clark and Hilldale or was that after the Clark and Hilldale? I wondered what the show would be like with the small audience, but they played and sang like they were playing to a packed Yankee Stadium. My Swiss friend Nicola said he’d never experienced live music like that before – he’s a total Love fan now…and won’t give me back my CD! 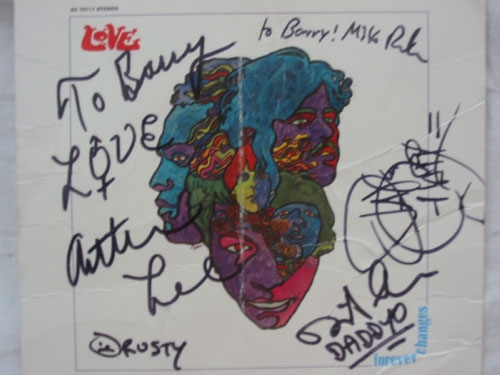 After the gig Arthur came out the bar and signed some autographs – and I got him to sign the cover of Forever Changes for me. Afterwards, we went backstage, had a few drinks, the lads added their names to Arthur’s on the album cover and then we took the “Love-Bus” back to the hotel. I told the boys that I’d probably have this signed album on my death bed and my last gasping words might be to a grandson telling the little bugger to look after it for me before I blacked out.

Fifteen minutes later, the gang was in the lobby drinking – Mike, David C, Rusty, Daddy O, Bent, Kose, Ciaran, Nicola and myself. We convinced the nervous looking Italian night porter that we’d like a few “quiet drinks”. So, we proceeded to have a few noisy drinks. Bent and the night porter had the fun habitual task of telling us to try and keep it a little quieter – and damn though, we did try.

Later in the night, the night porter came over to Mike and I, and was telling us something in Italian. When he left, Mike asked me what he was saying and basically the guy was trying to cut us off. No more beer. But, thirty seconds later, I looked up and saw my mate Ciaran standing with a bottle of brandy in his hand. Yeah, I thought before the realization that it was charged to my room! It was a welcome sight though and I finished my beer and appropriated glasses from the bar for everyone and we proceeded to dish out the brandy. Apparently it’s Kose’s favourite drink and I do recall a grin from ear to ear as I poured him a glass spilling more than I poured, but hey, floors get thirsty too. I went to my room and got my camera and took a few snaps. Incidentally, Mike said he had a pack of beers from the club and gave some to a few of the gang – and told me via a text message the next day that they got charged for them by the hotel!

So, eventually, people trooped off to bed and when Nicola, Ciaran (with the brandy bottle), and I went to our room and we realized we had no key. (I had managed to leave it in the room when I went to get the camera although we were convinced it must be behind the front desk). Front desk didn’t have the key. “Well, you have a master key or a spare key, right?”.

But, again, Italy being Italy, the master key was at home in bed with the hotel manager. When he arrived at around 3am in his dressing-gown, I was glad I couldn’t fully understand his Italian, but judging by his body language, I figured the bottle of brandy we had purchased earlier would not be complimentary. We got into the room. Then we left the room. We were hungry. Eventually, I headed upstairs and Ciaran followed about five minutes later. He explained that he found me sleeping on the corridor floor outside the door of the hotel. I must be “narco-alco-leptic”, I think.

At some time around 3:30am-ish, awake and in the room, the phone rang and Nicola spoke to someone on the phone. He put the phone down, looked at Ciaran and I, and said “who ordered the pizza?”. “Wohoooooooooooooo, we’re getting pizza?”. “NO”, of course was the reply from Nicola. It was the front desk noise police reaffirming my belief that the bottle of brandy was not going to be complimentary. So I took a final slug from the narcolepsy-inducing bottle and passed out.

In the morning, bright eyed and cheery after my four hours of quality sleep, I went to the lobby bar and bought 3 cokes for the boys and myself. Back in the room I couldn’t find a bottle opener – where’s a Swiss Army Knife when you need one? Anyway, we headed for breakfast around 9:15am and had breakfast with Daddy O. The rest of the guys came down and later we sat with Mike chatting for a while in the lobby. A guy was painting the walls near where we were sitting the night before – I didn’t realize brandy was such a strong bleach.

Anyway, guys, thanks for one hell of a gig and fun evening. Will never be forgotten.

The band had a day off and were heading towards the coastal town of Sarzana, via Pisa. Mike will be disappointed when he gets to the top to find no burger joint up there.

Nicola, Ciaran and I made our way to Milan to watch a Champions League game at the San Siro where AC Milan thumped four past Sparta Prague. Then my thoughts turned to get back into Switzerland without a passport. I thought, if all else fails, I can always try the Obi-Wan Kenobi trick from Star Wars, where he says to the Stormtrooper “You don’t need to see his identification”. It never fails.

Diary & all Pix by Barry Bresnahan