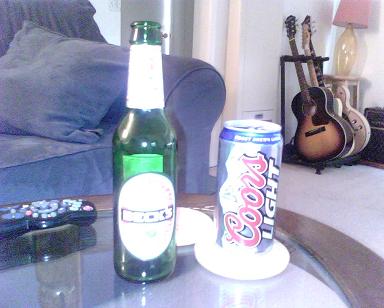 So Keith arrived Friday and took the shuttle to our place, arrived about 6pm. Hannah, Keith and I wet out to the Bitter Redhead (now called The Loop) to nurse some pints and catch some bands. A couple of guys at the venue had a tad too much weed before the show and fainted. The EMTs came and took one fellow to the Emergency Room for stitches (from his fall, his head had been bleeding). The other guy hung outside and recovered.

We got home around 11:30, all of us knackered, and got some rest. The next day I had to work but Hannah and Keith went down to Venice beach and then they popped into the guitar shop in the late afternoon. Funny, but not long after they left Johnny Marr and Billy Duffy popped in! David Jenkins gave Johnny Marr a Baby Lemonade “BEST OF” and then Johnny split.

Around 7pm Hannah, me and Keith went to La Cabana’s for Mexican. That was great. Then we got home and Hannah was sleepy and went to bed. Keith and I stayed up and watched a hilarious new tv show on HBO called “Eastbound and Down” until Keith nodded off from Jet Lag. Needless to say, I was drinking Becks and Keith was riding the Silver Bullet…